Though I haven’t actually played in about a year, I would still consider myself an avid racquetball player. After giving up on karate and baseball at age 11 due to choice and ineptitude, respectively, racquetball became my sport of choice and was something I excelled at through my collegiate years. Racquetball was not only a great athletic outlet, but also an effective way to relieve stress, especially in college when I’d often take advantage of the courts available in the school’s gym. I know that the sport turned my life around in more ways than one (health wise, psychologically, socially, etc), so it’s no surprise that if one were to steal my phone and take a peak at the lock screen, they would be greeted by this image. 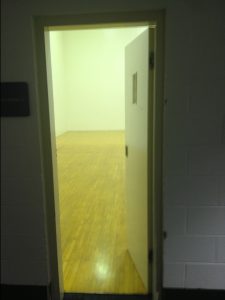 According to this image’s history on my phone, it was captured 5 years ago to the day yesterday at 16:36. At that time I was a student at Emory, where every student was given a membership to the school’s gym. I most likely had some time off after class, and was able to get a little practice in before dinnertime. I was probably packing up my stuff when I realized what a great opportunity I had to replace the background photo on my phone, which I wasn’t 100% attached to at the time, with something that would bring me joy every time I looked upon it. Thus, I dug my phone out from my racquetball bag and took the picture that you see before you.

Despite taking roughly 5,000 amazing photos across two iPhones between November 3rd, 2012 and now, this photo has still endured as my lock screen image. The angle I took it at was chosen intentionally. Due to the nature of the racquetball court, it would have been difficult to take a satisfying image of the entire court at once. I could have tried to take an image of the court from the above spectator area, but it wouldn’t invoke the same emotions as a photo of a scene on the ground floor which I have seen time and time again.

In the above image, one can see the court from the hallway outside. The door is wide open, beckoning an arriving athlete to come in and play. The court is well lit and ready for action.

I enjoy a thrill each time I cross the threshold onto a court. Something special happens when you close the door and are surrounded on all sides by 20’ high walls. To me, it feels like entering another world. It’s so different and so cut off from the rest of any gym. Unless one chances to glance up towards the spectator area, it’s easy to forget where you are. Most courts are almost soundproof, further separating the players from the outside world. It is an amazing space where it’s possible to be alone with your thoughts and a racquetball. This picture captures the moment of walking through that doorway into the court as well as a still image can.

I will probably take thousands more pictures in the years ahead, but none will ever come close to matching what this photo represents. Unless I take a better version of it, it will most likely remain on my lock screen for the foreseeable future.